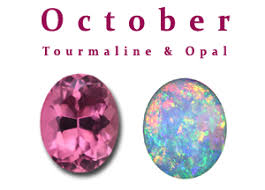 As you already know from our last post, October is one of the lucky months. It has not only one, but two gemstones associated with it! In Part I, we learned about October’s original birthstone, Opal. More recently, another stone was added to make it easier and more affordable for the public to get jewelry associated with their birth month. In 1912 the National Association of Jewelers created the first official list of birthstone, and declared Pink Tourmaline (sorry guys!), the alternative gem for the month of October.

There are multiple kinds of tourmaline, seeing that it comes in pretty much every color of the rainbow- which is what makes tourmaline a fan-favorite through time. The first tourmaline crystal was discovered in Brazil, and it was bright green. The Spanish conquistador confused the vibrant for an emerald. It’s easy to understand why tourmalines are easily confused with other gems, but VERY few gems match tourmaline’s intense range of colors.

Pink Tourmaline, however, was first discovered in the 1600s by Dutch explorers off the west coast of Italy. History also shows us that, for a time, pink and red tourmaline were assumed to be rubies. Although pink tourmaline tends to be ‘pinker’ in color than rubies, the similarities are so strong that even the stones in the Russian crown jewels- which were believed to be rubies for centuries, are now thought to be tourmalines!

For centuries, cultures all around the world have had different beliefs of the virtues wearing tourmaline can bring. It’s be known to keep the digestive system heathy and strengthen bones. In the 18thcentury, a Dutch scientist claimed that a tourmaline wrapped in silk and placed against the cheek of a feverish child would induce sleep… (say what?!) Ancient ceremonies in India used tourmalines as a tool to bring insight and help in the discovery of that which is good, while exposing who or what was the cause of evil deeds.

Tourmaline has been known to have many positive attributes in the spiritual realm. The gem is what is called a “receptive stone”, which means it is soothing, calming, and magnetic. It creates peace and promotes communication between the conscious and unconscious minds allowing psychic awareness to blossom! While being a receptive stone, tourmaline has also been said to be a ‘stone of reconciliation’, and fosters compassion and cool headedness. It’s known that this stone of reconciliation radiates energy that attracts money, healing, and friendship.

Although there are MANY different types of tourmalines, pink tourmaline is the rarest of the family- even more rare that rubies! There are so many reasons to sport pink tourmaline, even if you weren’t born in October! And, unlike October’s primary birthstone opals, it’s notknown to be unlucky if it’s not your birthstone. Whether pink tourmaline is your style or not, October babies have two totally different, dazzling, and mystical gems to choose from to represent the month they were born! (lucky!)