Like many other birthstone gems, peridot has a long and important history. However, unlike the other gemstones, peridot is only found in one color – a vibrant lime green that is the perfect complement to any summer wardrobe and to represent those born in the summer month of August. 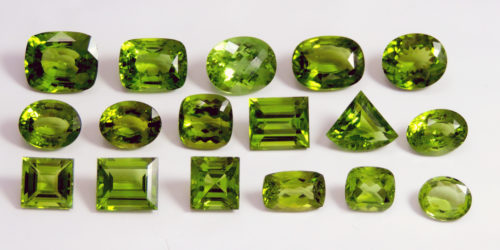 There are a few differences that set peridot apart from other gemstones such as how it is formed. While most stones are formed in the Earth’s crust, there are two exceptions- diamond and peridot. These two stones form much deeper in the Upper Mantle, between 20 & 55 miles deep for peridot, and 100-150 miles deep for diamond! If that doesn’t twist your mind a bit… peridot stones have also been found in meteorites that have traveled through space and landed on Earth!

The history of peridot dates back to ancient times, at least 4,000 years and especially in Egypt, however no one truly knows how old peridot is. This is because up until the late 19th century, peridot was very commonly mistaken for emerald. The first recorded findings of peridot gems were on the volcanic island of Zabargad, located in the Red Sea off the coast of Egypt.

It’s said that Egyptian Pharaohs wore these gems in jewelry and clothing and were highly revered. It’s been discovered that many of Cleopatra’s famed and treasured emeralds were in fact peridot! These gems were so treasured by the Egyptians that the location of Zabargad was kept a closely guarded secret. In texts, it’s stated that the island was often covered in dense fog, making it nearly impossible for ancient navigators to find. With the fall of the Egyptian empire, the secret of the island’s location was lost and was not rediscovered until 1906; since then, the Zarbargad peridot deposits have been exhausted.

Peridot held a strong presence in many other cultures and ancient civilizations up throughout the middle ages. Medieval Europeans would bring the peridot stones back from the Crusades to decorate church plates and robes, and also used the gems as talismans that were said to have the power to remove “terrors of the night”.

Today, along with being the birthstone for those born in the month of August, peridot also symbolizes the 16thanniversary of marriage. In lore and legends, peridot has always been associated with light. The Egyptians even called the gem “Gem of the Sun”.

The Catholic Church is also a major symbol of the gemstone. For centuries, the church has believed that peridot symbolized moral purity and to this day Catholic Bishops wear peridot rings and other jewelry.

Over the course of history, there have been many tales and legends of how the peridot gemstone possesses a strong magical power. According to Pliny The Elder, the Great Roman Authority, peridots would exert their strongest magic when worn on the right arm, and that in order to maximize the stone’s potential it must be set in gold. 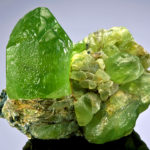 Peridot has long been considered an aid to friendship and can free the mind of envious thoughts. Other legends say the gem will bring happiness and good cheer, which in turn would attracts lovers which leads to many other legends stating that peridot can be used to enhance prosperity, growth and openness.

Cultures and legends over the course of history credit peridot with the ability to turn dreams into a reality, ward off anxiety, and lessen the thirst of a person suffering from a fever when placed under the tongue.

Like most other birthstone gems, peridot comes with thousands of years of history, legends and lore. Unlike other birthstone gems however, peridot has a few attributes that make it stand out against a sea of other glittering & valuable stones. With a vivid, solitary shade of green, the peridot is the perfect gemstone to help you wind down summer, lower stress and anxiety levels of the changing seasons and schedules, and enhance your confidence- making it there perfect gem to wear for just about anybody!