As summer temperatures rise, what could be a better representation than the fiery color of July’s birthstone, the ruby.

The allure of rubies has worked into nearly all cultures around the globe from the beginning of history up to modern times, and with that history comes tons of legends and lore about the gem.

There’s no recorded time of when the first ruby gemstone was discovered; however, there are records of the transport and trade of rubies in literature along the Silk Road in China, which was a trade route that connected China with other ancient kingdoms like Persia and Rome as far back as 200BC. The gem is also mentioned 4 times in the bible and considered the most precious of the 12 gemstones created by God. To sum it up, rubies have been revered and valued for most of human history!

The finest rubies were found in Burma and have been mined there since at least 600 AD. Burma’s ancient warrior were known to have the gem inserted into their flesh before battle, believing they would bring them invincibility and luck in battle (wearing them as jewelry just wasn’t enough!). Even through most of the middle ages, rubies were considered a stone of prophecy, and people thought that they would darken in color when danger was near.

Red has long been symbolic for our strongest emotions: love, anger, passion, fury and power. Strong associations with blood and fire were also tied in due the gem’s red hue, and ancients thought those who risked their lives were believed to have a special connection with the gem.

In the 8th century, an Arabic book on dreams talked about the significance of dreaming about rubies. It stated that if a king dreamt of a crown set with rubies, his enemies would fear him more, and great joy and fortune was headed their way.

Along with representing births in the month of July, the ruby also symbolizes the 15th and 40th anniversaries of marriage. With the gem’s passionate red hue, it makes the perfect romantic gift… no matter which month you were born in or how long you’ve been married!

Because of ruby’s association with blood and fire, the list of mystical properties that the gem is said to have goes on forever. In the middle ages, rubies were believed to cure liver problems and counteract poison… and even restore youth and vitality when ground into powder and rubbed on your skin! (How about adding some ruby powder to your daily skincare routine?!)

Physically, the gems are thought to energize and balance, overcome 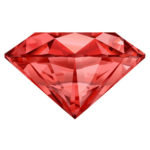 exhaustion and detoxify the body and blood. Emotionally, rubies can be recognized as the stone of courage, which legend tells us that a person with a ruby can walk through life without fear of evil or misfortune. The gems are also known to increase motivation and the setting of goals.

Being the most historically significant gemstone, there’s no wonder the legends and lore that the gem has acquired over the centuries. The desire for this fiery stone is just as great today as it has always been and because it symbolizes passion, wealth and success, it’s a great gemstone for anyone to wear; whether your it’s your birthstone or not! 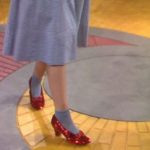 I’m sure you’ve heard of Dorothy Gale’s red ruby slippers? From the iconic, technicolor film “The Wizard of Oz” which hit the box office in 1939. The film came in a time of war and hardship, and won the hearts of people with a magical escape from reality filled with witches, flying monkeys and munchkins.

Now, the pair that Judy Garland while filming the movie weren’t exactly covered in real rubies. Approximately 2,300 iridescent red sequins were sewn onto each shoe. This is because there were 6-7 identical pairs made for Judy to wear throughout filming.

The ruby red slippers did not become a reality until 1989, when Harry Winston created a pair to commemorate the film’s 50th anniversary. The iconic slippers covered in genuine rubies totaled a whopping $3 Million, featuring 4,600 rubies totaling over 1,300 carats, and 50 carats of accent diamonds.