As September approaches, many of us start thinking about football season and pumpkin spice lattes…. UNLESS your birthday is in September. Then you’re thinking about what you’re going to get from family and friends, & HOPEFULLY you’ll get a big beautiful Sapphire, since it’s your birthstone of course!

There are few gems that have held attention throughout time as well as Sapphires. Sapphires are more commonly recognized by their rich, royal blue color. However, this gem can occur in all the colors of the rainbow. Minus red (that’s a ruby!). The most value however, goes to the boys in blue. The bluer- the better- the more expensive,  when it comes to sapphires. No matter the color, all sapphires get their extraordinary hues from traces of elements such as iron, titanium, and chromium. It’s also an insanely hard stone- measuring a 9 on the Mohs Scale, second only to Diamonds! Because of their hardness, sapphires are valuable in many areas other than jewelry… like scientific instruments, high-durability windows, watches and other electronics. Who knew this precious stone is so versatile, right?! Now that we’ve covered the facts, we can get on with the fun part- the legends and lore of sapphires. Because sapphires are among the earliest known gemstones in history, their symbolism is extremely diverse and includes many different subjects in many different cultures.

Traditionally, these gems have been prized for their celestial blues & violets, which is why the stone has been long connected with the planet, Venus. Sapphires were named after the Greek word, “sapheiros”, meaning blue. Thus came the belief that the world sat on an enormous sapphire, which painted the sky blue with its reflection. The Greeks also believed that carrying sapphire stones into Delphi amplified the questioner’s wisdom when consulting the Oracle at Apollo’s Shrine. The stones would clear their minds, allowing them to better understand answers given.An extremely popular medieval belief also mentioned that sapphires were an antidote to poison and that, supposedly, the gem increased overall strength and health for whoever wore it, warding off any illnesses and washing away poison.

Throughout time, royalty has also known to sport these gorgeous blue gems. The British Crown Jewels, are totally loaded up with blue sapphires- you may be familiar with the 12-carat oval sapphire engagement ring Prince Charles proposed to Princess Diana with in 1981 (holy smokes!) Now Princess Kate wears the ring! Royals often wore sapphires for dual purposes- not only to show off wealth, but to protect the wearer from envy and infidelity. Supposedly, people believed sapphires had the power to bring harmony between lovers as well as peace between adversaries. (we’ll remember that one!) 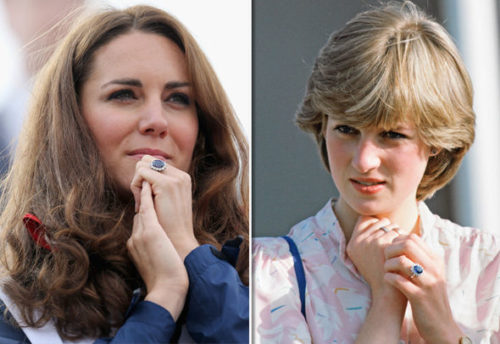 The Sapphire stands as one of the most sought after and oldest gems known in our world. With all their mystical properties and connections to cultures throughout time, this stone is sure keep your mind clear and body free of illness!