Amethyst has been a prized gem to man for thousands of years. 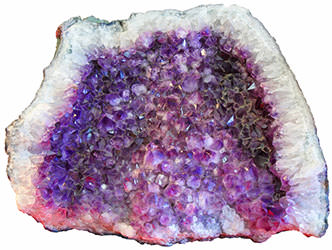 These gems have been set in religious and crown jewels and have been worn by bishops and figures of the Christian church for ages. It was even thought that Saint Valentine wore a ring set with an antique amethyst with a carved image of Cupid, which then connects the dots to the gem’s ties with the month of February!  The stone also symbolizes the 6th anniversary of marriage.

With being such a popular gem used throughout history, there are many legends and folklore that can be found for amethyst. At one time, true amethyst was valued equally with the diamond. However, after large amounts were found in South America and eventually all over the globe, the gem’s rarity and value decreased. 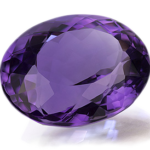 We can thank the Ancient Romans for the most famous folklore legend about amethyst. Because of the gem’s grape-like color, the Romans associated it with the god of wine, Bacchus.  They believed that wearing an amethyst could protect you from drunkenness and instill a sober mind. The name “amethyst”, is actually derived from the Greek word amethustos, meaning sober. 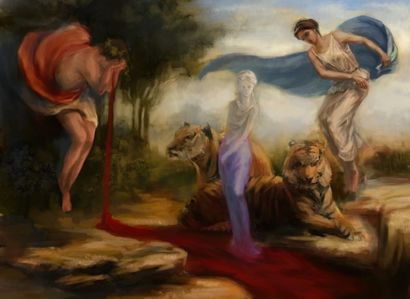 Long ago, a beautiful woman was on her way to worship at the Temple of Diana. However, she had the misfortune of crossing bath with Bacchus, the god of wine. Bacchus was angered since he’d just been disrespected, he vowed he would take revenge on the next person he met. He spied the woman and unleashed his two guardian tigers on her. As the great beasts bounded towards her, the goddess Diana intervened. To spare her such a terrible fate, she turned her into pure, clear stone.

With immediate remorse, Bacchus wanted to atone for his actions. He poured his tears of wine over the stone, staining her a deep, violet hue. And so, the maiden Amethyst lent her name to the crystal.

Throughout time, many other legends and uses appeared for the amethyst gemstone; but we think we can all agree that the Roman’s legend for the gem is our favorite!

Like we said earlier, amethyst is the gem that modernly symbolizes the month of February and the 6th anniversary of marriage. During the Renaissance period, amethyst stood for humility and modesty. Throughout the ages, the gem was also used by rich and powerful monarchs for symbolize royalty. It’s rumored that the gemstone was a personal favorite of Queen Katherine the Great of Russia, who reigned during the late 1700s. Amethyst has always been a symbol of religious classes that have ruled human cultures. In the Chinese philosophy of Feng Sui, amethyst is said to give and receive material wealth. At the highest level of the philosophy, the gem is said to give the spiritual understanding required to reach the state of bliss. Even today, amethyst represents the crown chakra at the top of the head where divine essence enters.

To this day, amethyst is still used for healing remedies and spiritual enlightenment. For over two thousand years, the gems have been saturated with ancient magic. They are just as popular today as were back then!

Amethyst has had a presence in cultures all over the world. Centuries ago, amethyst was actually moistened and rubbed on the skin to prevent pimples and rough skin. In traditional Chinese medicine, it was used for stomach pains and bad dreams; and ancient civilizations believed that if the gem was placed under the pillow while sleeping, it was supposed to banish insomnia and promote pleasant thoughts and often prophetic dreams.

From alleviating headaches and depression, to being valuable for treating the central nervous system & brain, amethyst has hundreds of healing properties. It’s been said for centuries that the gem can bring forth the purest aspirations of human kind: chastity, sobriety, and control over one’s thoughts. The stone encourage calm, bravery, and contemplation.

This post could go on and on if we listed all of the properties and historical value associated with amethyst gemstones!

One thing is for sure- no matter if February is your birth month or not, sporting this stone can give you some serious health benefits and not to mention good graces while enjoying a few adult drinks!